SpringCard's technical team is proud to announce the launch of a new generation of contactless readers for high-end access control applications, the FunkyGate NFC family.

As the name suggests, the FunkyGate-IP NFC brings the power of TCP/IP up to the door or gate. A standard RJ45 plug connects the reader to any Ethernet LAN (10 or 100 Mbps). More than that, the FunkyGate-IP+POE NFC reader is powered directly by the network (Power Over Ethernet), thus removing the need for the classical 12V power cable. 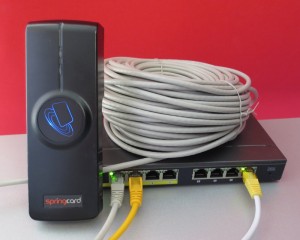 The FunkyGate-IP+POE eases the job of wiring the building before installing the access control system. With only a single Cat5e right to the door, the reader is operational as soon as it is plugged to the network.

The FunkyGate-IP NFC and FunkyGate-IP+POE NFC readers take full benefit of SpringCard's know-how in all the various 13.56MHz protocols, and pave the way for a easier and wider use of NFC mobile phones in access control and identification applications.

SpringCard MultiConf is a new, versatile, configuration application for all SpringCard products. Define the FunkyGate-IP NFC's configuration, write this configuration into a Master Card, apply this Card to all the readers you want to configure, and voila!

Thanks to the 4 card processing templates -a concept shared with the Prox'N'Roll RFID Scanner and among all SpringCard standalone readers-, the FunkyGate-IP NFC is able to fetch virtually any data from current contactless cards and RFID tags.

The 'NFC' in the product's name denotes the exclusive ability to support new reading schemes based on NFC Forum's concepts : 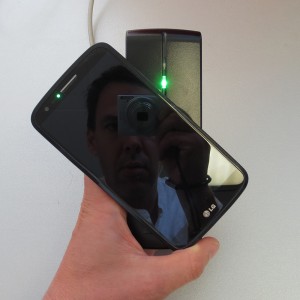 Thanks to Android's 4.4 HCE mode, the FunkyGate-IP is able to get an identifier or perform a transaction over the NFC smartphone, even in screen-off mode.
(this is also an unusual selfie)

An SDK will be released soon, together with a demo of an access control server application running on a small Linux system, typically a Raspberry Pi.

The reader also embeds a tiny HTTP server that makes it possible to develop a client application in no-time using high-level languages. A simple REST API exposes the reader's behaviour (basically controlling the LEDs and buzzer) and the card/tag numbers to the outer world. 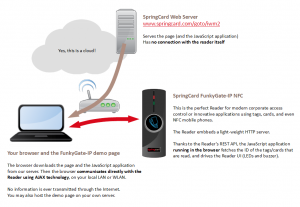 An example setup of using the FunkyGate-IP in the cloud: the reader provides data using a REST API (HTTP request, JSON content). The demo application runs in the browser (JavaScript).
(click the image to enlarge) 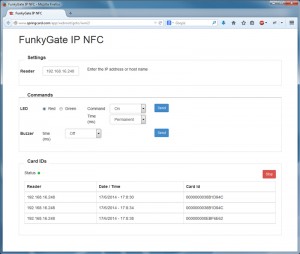 Using the FunkyGate-IP NFC through HTTP: a demo-page showing how to use the REST API from a JavaScript application (if you have a FunkyGate-IP, use the demo at www.springcard.com/goto/iwm2/

First batches of FunkyGate-IP NFC (and FunkyGate-IP+POE NFC) are already shipping to our early-adopters. Don't hesitate to contact us for a demo or to evaluate the product.

New documents and the SDK will be published on our web site in the oncoming weeks. In a second step, the E663, which is the core the FunkyGate-IP NFC is built on, will be offered to developers and integrators as a versatile Ethernet-based RFID/NFC OEM module. Stay tuned ! 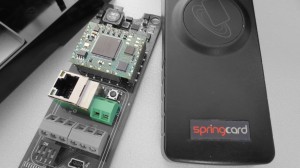 The FunkyGate-IP is built upon the new SpringCard E663 core. Supporting Ethernet and TCP/IP, this OEM RFID/NFC module could be the basis of new generation solutions that closes the gap between contactless smartcard technologies and today's cloud architectures. 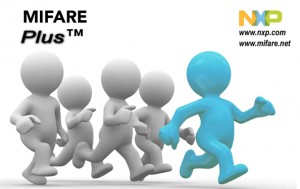 Just in-between, the Mifare Plus has a flat memory model (blocks) but with a good isolation between sectors,  2KB or 4KB of storage, and AES cryptography. The key advantage is the memory mapping that is the same as Mifare Classic, so existing applications that store data in the cards may be upgraded without major changes in their logic (yet changes in the security scheme and in the command set are not trivial...). But on the other hand, if the only need is to have a serial number or to store a small amount of data, Mifare UltraLight C does the job perfectly and is cheaper. As for Desfire EV1, its compliance to 7816-4 standard is the key in interoperable schemes (including future uses of NFC phones to emulate contactless cards), where the two other products remain totally proprietary.

NXP (formerly Philips SemiConductors) Mifare UltraLight chip (MF0ICU1) is a inexpensive contactless memory, widely used to make disposable transport tickets or other low-cost identification tags. As MF0ICU1 lacks of authentication or even password protection schemes, the reading application has to way to determine whether the serial number and the data come from a genuine card, or from a a spy/replay device emulating it  (read this article for a few details).

The new Mifare UltraLight C chip (MF0ICU2), while remaining compatible with MF0ICU1, now provides a strong mutual-authentication algorithm, based on the standard 3DES (Triple-DES) algorithm. This allows to make sure the card in front of a reader is genuine (the application and the card share the same secret key). 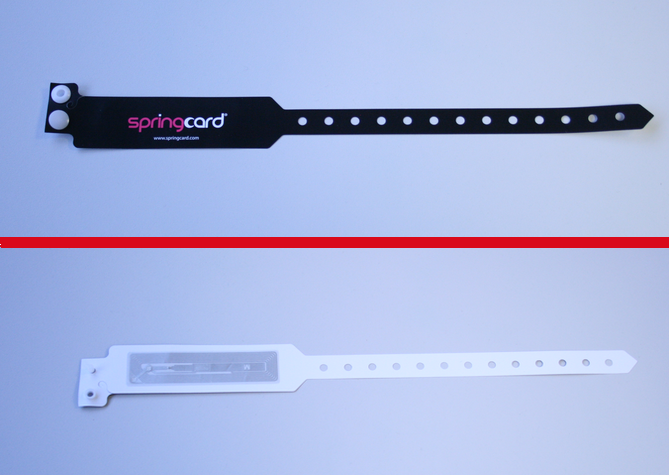 A Mifare Ultralight C embedded in a wristband, used for ticketing and pre-payment during the Gala ECE event.

Gala ECE is a successful example of the Mifare UltraLight C's use for ticketing and payment. To prevent the risk of theft in this sort of giant night-club, the bars were not allowed to accept bills or coins ; wristbands had to be credited at a few kiosks, and then used as electronic purses. When it comes to money, security is a major concern. The organisators wanted a secure purse solution yet remaining compliant with low-cost tags, and SpringCard successfully help them to specify and develop the it on top of Mifare UltraLight C.

This experience has shown how easy it is to implement quickly a large scale ticketing and pre-payment system, in the same price range as 'conventional' memory cards (Mifare, Mifare UltraLight, or their equivalent in ISO 14443-B), but with a very good security level -that was before achievable only using more expensive smart cards.